That’s an alarming number of parents who are allowing their children to use just the vehicle seat belt. 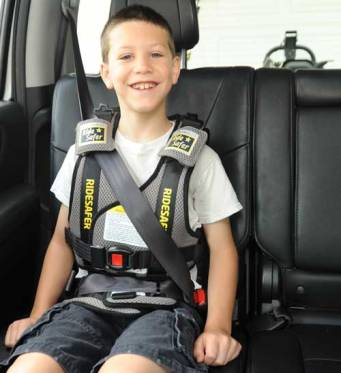 A study done recently also showed that 7 out of 10 parents didn’t know that most children won’t fit in the vehicle seat belt until they are 57″ (4’9″). The study was funded be a grant from General Motors Foundation and surveyed 1,000 parents of children 4 to 10 years old nationwide.

Meanwhile car crashes are the second leading cause of death for children in this age range — 340 children ages 4 to 10 were killed in car crashes in 2012. And yet it has been shown that children using a seat belt positioning device have 45% less chance of serious injury. The intent of a booster seat or RideSafer vest is to protect children who are too big for a car seat but too small for the vehicle seat.

Most children won’t fit in just a vehicle seat belt until they are 4’9″ tall. Sometimes children will fit in some vehicles but not others. As they get closer to being tall enough, parents need to be aware of how the seat belt fits in various cars or even seating positions in one car. If children can pass the 5-step seat belt fit test for every seat they are in, they no longer need a RideSafer or booster seat.

Why do parents move their kids out of booster seats too early? There could be several reasons for this. One is the law in most states require kids use a child restraint until they are 8 years old. Although most kids aren’t tall enough by 8 year old to properly fit the vehicle seat belt, they are no longer legally required to use a child restraint or seat belt positioner.

Another reason is that other children aren’t using a seat belt positioning device so older kids feel like they look like a baby if they use one and their parents don’t force the issue. The are less conspicuous boosters available for those older kids who are just not quite ready for the seat belt yet but still need a bit of a boost and don’t want to be in a “baby” seat.

One other thing parents need to remember is that it’s safer for children to ride in the back seat of the car. Child Passenger Safety Technicians recommend children remain riding in the back seat until the children are at least 13 years old.